Pollution Control by use of Bioindicators / Biomonitors

An objective of prophylactic environmental protection must be to obtain and evaluate reliable information on the past, present and future situation of the environment. Besides the classic global observation systems such as satellites and instrumental measurement techniques like trace gas and on-line water monitoring, increasing use should be made of bioindicative systems that provide integrated information permitting prophylactic care of the environment and human health. In the last 25 years, bioindicators have shown themselves to be particularly interesting and intelligent measuring systems. As long ago as 1980, Müller considered the “bioindicative source of information” one of the pillars of modern environmental monitoring, since “bioindication is the breakdown of the information content of biosystems, making it possible to evaluate whole areas” (Fränzle et al. 2007). 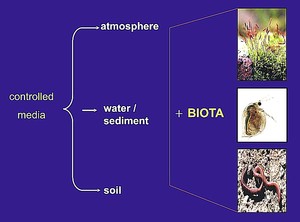 The application of organism-based surveillance methods (biomonitoring / bioindication) can extend our knowledge of mechanisms which are involved in (matter-based) interactions between the organism and its environment (Wünschmann et al. 2008). Embracing and combining topics and methods from environmental chemistry, toxicology and ecology, ecotoxicology succeeded in characterizing and quantifying effects of chemicals during the last decades by means of novel methods. The mere multitude and diversity of chemicals which make their way into the environment (by 2003 some 5 million compounds were known [Fent 2003], with additional 500-1000 newly introduced compounds per year which then are broadly used) brings about an immense task to ecotoxicology, an inter- and transdisciplinary task which nowadays surpasses the challenges to both human and veterinary toxicology (Fränzle O 1999). Being a part of environmental sciences, ecotoxicology includes many specific methodological innovations which only in their combination permit to meet societal demands for protection of environment (Oehlmann & Markert 1999). Here, main tasks to be done before novel chemical compounds can be accepted even for laboratory amounts and purposes (biotests; e.g. Fomin, Oehlmann, Markert 2003) include prospective risk evaluations, but also measurements of effects damaging organisms and entire populations in open, “free” environments (the latter achieved by means of bioindication; e.g. Markert et al. 2003a,b). Using organisms of different trophic levels (plants, animals, microorganisms) to determine detrimental effects of chemicals does not represent the only peculiarity typical of both lines of work, but these also differ with respect to statements on the situation of terrestrial and aquatic environmental compartments.

Please go ahead with the Definitions of Bioindicators / Biomonitors.

Back to Fields of Teaching, Research and Mangement.