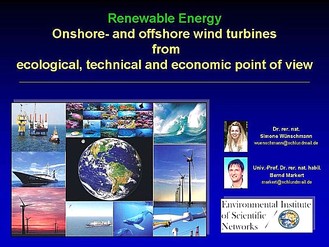 Lecture of Dr. S. Wünschmann and Prof. Dr. B. Markert

The present mix of renewable resources used in both thermal and electrical energy delivery represents a superposition of both technical problems still to be overcome (the less so) and political decisions, many of which are made in favor of protecting the respective domestic industries for both producing energies and the very power-plants required to obtain and convert them: this partly is a quite reasonable and to some extent even responsible industrial policy.

Now there are “old” energy sources exploitation of which has become so costly that it is worthwhile only in certain most simple conditions, including hard coal, and in another way, oil sands. This statement refers to all economic costs of exploitation, ecological by-effects (and cultural ones such as destruction of villages and first-nation settlements in favor of open pits) and risks production causes to the workers. The renewables make it to the market step by step with their increasing ability to compete economically and the perspective to relieve old dependences, in addition to avoiding the above risks by offering genuine technical alternatives. 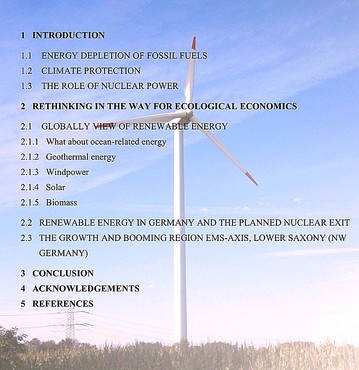 Of course, this might produce problems for countries which have virtually nothing else to offer to today´s global markets than their fossil energy carriers including uranium while some of the “bigger shots” in fossil fuels mining are, actually, highly industrialized countries, like the US, Canada, Australia, and Russia. Apparently, however, there is no convincing perspective of sustainable development by which the common populations might benefit from exploitation of fossil energy carriers alone for countries like Niger in Western Africa (uranium), or Yemen in the Middle East (oil). Several of Arab oil-producers are very aware of what might happen to them, their regimes, their population and their common welfare (which is often really restricted to some indigenous minorities) when oil continues to get scarce, and there are warning examples in economic history of countries, societies and national economies running out of the single, principal minable resource the entire economy was based on, like tiny South Pacific republic of Nauru (phosphate) and Bolivia in Central South America (tin, silver). 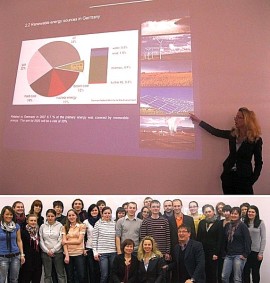 Nevertheless, the exchange of our joint economic basis for energy production appears feasible globally within some 50 years from now. It remains to be seen whether this is fast enough both to control climate effects from fossil combustion within acceptable limits, and to reorganize completely our strategies of personal transportation while avoiding yet more catastrophes like those in Chernobyl or Fukushima (but also the failure of a hydropower plant in Longarone [Friaul, NE Italy] which took some 2,000 lives in 1963). Besides of this, nuclear powerplants – like other technical systems – can run into operation states where they almost or entirely escape control. If a catastrophic accident then can be avoided due to self-regulation or simply good luck, it is by no means satisfying or consoling that e.g. nuclear reactors got into states which not even were known to their own operators for extended periods of time (like in Forsmark, Sweden, in 2006), let alone these people would be able to influence it anymore.

The future is ahead but notoriously hard to predict; but we are to take chances, severe chances if we decide either way, and we should be aware that doing nothing is tantamount to taking not only chances but pursuing ways we know for sure not to be sustainable, not even in the shorter term.

﻿﻿Cited references to this chapter﻿﻿