During the years from 1983 to 1985, 65 of 88 naturally occuring chemical elements were able to be quantitatively determined for the first time in different European plants and soil types with the aid of instrumental multi-element procedures. The corresponding detection limits were determined for additional 15 elements (Lieth and Markert 1985; Markert 1986). These studies showed that elements like lanthanum, barium, and antimony, which had been ignored in ecophysiological research up to that time, were present in plants in concentrations similar to those of elements such as cobalt and molybdenum, whose metabolic-physiological functions had been expored in detail. This led to a series of systematic investigations.

Up to this point no research project existed that attempted to quantitatively catalog all possible elements of the periodic table into the different components and compartments of an ecosystem.

Because of similar ion radii and charge ratios of individual elements or element groups, each element and each class of material can be significant at some point in the ecosystem. At the outset it is immaterial whether these chemical elements have direct enhancing or inhibiting effects on structural and enzyme systems, or whether they compete indirectly with other reactants due to their presence (Markert 1986). Many elements, which have been investigated only insufficiently if at all, have an effect even at very low concentrations. Since we can expect further rapid increases in concentrations of a number of elements (such as platinum metals, lanthanides, et.) in the future because of anthropogenic activities, from an ecological and chemical viewpoint it is absolutely vital that these elements be throughly studied (Arndt et al. 1987; Lieth and Markert 1988; Nriagu and Pacyna 1988; Steinnes 1984; Steubing and Jaeger 1982).

The analytical techniques which have recently become available for the quantification of practically all naturally occuring elements make it possible to perform the necessary and novel element concentration studies in the ecosystem today. For many elements it is already possible to investigate in which plants they are enriched, which elements stem from the immediate physical environment (soil, water, air, dust, etc.), and which ones are introduced into the ecosystems from greater distances (Markert and Lieth 1987). 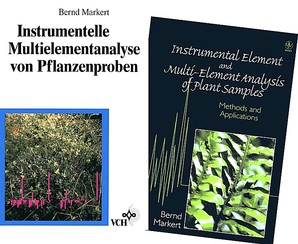 Please go ahead with sampling procedure.