An increased transfer of chemical elements into the different environmental compartments may bring about damages to health which, on the level of an entire organism, can be changes of their respective morphological, histological or cell structures yet may also be changed in biochemistry or metabolic physiology.

For several decades now, several scientific disciplines such as geochemistry, geomedicine, environmental sciences and ecotoxicology are concerned with investigating this problem in order to identify and quantify possible risks, yet focussing on different aspects of this problem. Workgroups who rather adhere to traditional lines of geochemistry adress effects of elements or compounds thereof on biological systems already since early in the 19th century. Some corresponding phenomena were already then known - and used in prospection of ore lagerstätten – like “witch springs” containing larger amounts of dissolved heavy metals; somewhat later occupational diseases of workers processing certain metals were attributed to the latter exposition (“hut fever” due to Mn or Zn vapors/dusts or the mad hatter syndrome [owing to Hg exposition]).

In this very 19th century the extent of various chemical elements are used for most diverse purposes increased rapidly. Accordingly, the ratio (technophilic index) between release by anthropogenic activities following the minery – ore processing – technical application of metal or alloy sequence and erosion to be described by geochemistry does increase in the same way. Once again first occupational health hazards turned up; accordingly, geochemical aspects were replaced or at least augmented by health considerations. Thus geo- or (speaking in a modern manner) environmental chemistry turned into environmental medicine.

As both anthropogenic emissions and their health effects occur somewhere on the surface of Earth, they can in addition be spatially described, producing the new branch of geographical medicine. It is possible to survey amounts of emission also by considering their biological/toxicological effects. So health damages in man caused by exposition to some chemical and bioindication are linked to each other, including aspects of spatial distribution pattern and causality likewise. Eventually this gave way to ecotoxicology.

According to Markert et al. (1997), bioindicators are organisms or communities of organisms, which provide pieces of information on quality and changes of the environment by the organisms´ contents of certain elements or compounds, and/or their morphological, histological or cellular structures, processes in metabolism and physiology, their behaviour or population structures, each including possible changes of these parameters (Markert et al. 1997).

With environmental sciences the more inclined towards medicine, they are especially concerned with human exposition and burdening. As compared to both animals and plants, retrieval of human samples is more difficult, except for various secretes and structures attached to skin (hair, fingernails, footnails). The different functions of the secretes correspond to the extent, to which inorganic and organic species pass over: this latter is the main task of urine, whereas sweat does contain e.g. Fe and Zn yet this is but a minor aspect of secretion functions, whereas mother´s milk is “meant to be” a nutrient rather than a sink of possible pollutants. Yet investigation of mother´s milk might provide information on pollutions the mother is exposed to, while there are also implications for both supply and exposition of a breast-fed child. Further information in Wünschmann et al. (2008).

Processes and effects of organics (not just phenols which directly resemble estrogens in structure motifs) thus are going to hit – though indirectly – more and more different species in some ecosystem than “inorganic pollutants” (would) do, owing to the propensity for bioaccumulation.  If the latter occurs to an extent that toxic, reproduction-toxic or other endocrinic effects become considerable next to top of local trophic chains, derivation (in fact, devouring) biomass, components thereof and population dynamics are influenced in all the lower trophic levels also.

Ecological stoichiometry studies did underline the effects of consumer-driven nutrient recycling (Vanni et al. 2002; Elser & Urabe 1999) that the (effective, average) length of trophic chains also is relevant for the distribution of bioaccumulating organic pollutants in the biota: once top-level consumer populations are destroyed in an ecosystem, the average lifespans of the lower-level consumers (or even plants) tend to increase which means that they will accumulate higher average levels of the said organic compounds. The problem also exists with inorganic noxes such as Cd, but at least these do not undergo biomagnifications via consumers. Heavy metals might cause problems though even if they are essential (excess Cu, Mn, V, or even Fe being considerably toxic) but the effect is not amplified via the trophic chain as these elements are not going to biomagnify – except perhaps for some which readily undergo biomethylation to form products stable enough to be handed up the trophic chain (As, Sb, Hg, possibly Bi and Pb). Further information in Fränzle et al. (2012).

a) Pharmaceuticals in the Environment – Special Emphasis to Diclofenac (Voltaren™) ﻿

Among the about 100,000 different compounds used by humans for quite different purposes, some are intended to act in the environment (e.g., biocides) while others just get into contact with environmental compartments (e.g. as part of constructions, vehicles), fuels are exhaled after combustion and, finally, there are biological agents which are to cause their intended effects within some organism but will leave the site of action eventually as such or as their metabolites by excretion: pharmaceuticals. aquatic Some of these pharmaceuticals are highly reactive or bioactive, damaging particularly organisms  at levels about those actually seen in rivers now. Excretion would not necessarily mean pollution of the environment but sewage treatment plants can hardly cope with many of these compounds, letting them eventually pass into rivers and lakes.

Commonly employed pharmaceuticals which behave like this include steroids, various amines. Among the latter amines there are neuroactive agents including serotonine reabsorption inhibitors, stimulants, and psychopharmaceuticals like anxiolytics, antidepression agents or cures for cramps, seizures and epilepsy, like carbamazepin. All these, besides of blood lipid inhibitors, can be readily detected in open waters in both Europe, Northern America, Japan, or Australia, as they mostly escape sewage treatment (not even being substantially adsorbed to sewage sludge). Thus some property must be identified which offers a perspective for chemical attack during water cleaning treatment apart from microbiology. As mentioned before, many of these substances are (primary through tertiary) amines, or carboxamides, and either are known to be susceptible towards 1e-oxidation pathways at moderate potentials in aquatic systems. The best way of inducing such electron transfer processes is photochemistry, perhaps augmented by a semiconductor interface. For reasons given below, the focus of our interest is with aromatic amine (substituted diphenyl amine) diclofenac and compounds containing some of its structural motifs only.

Diclofenac is an agent that is used as a non-steroidal analgetic which cures muscle- and joint aches by cyclooxygenase (COX2) inhibition and, besides, does interfere somewhat with cyclopentenone (prostaglandine) signal systems. It is a shorthand – this way of naming compounds is quite typical for pharmaceutical agents – to denote 2´,6´-dichloroanilinophenyl-2-acetate.

Although most diphenylamines undergo air oxidation readily, the anionic compound diclofenac (annual consumption of which in Germany is some 90 t) is quite stable, thus most makes it through a sewage treatment plant unchanged. As it hence does not undergo biochemical modification either, and also is used in veterinary medicine (Oaks et al. 2004), the compound will be found both in carcasses of fallen animals and in aquatic sediments.

There it poses a risk to birds consuming either carcasses or sediment, with certain vulture species living on the Indian subcontinent being most vulnerable. After taking up diclofenac with contaminated meat (i.e., eating dead animals which succumbed from some disease or ache even though they were treated with diclofenac and, possibly, other kinds of medication), these vultures would soon become incapable to fly and eventually die from renal failure causing uremia and visceral gout. Other causes of intoxication (Cd, Pb, organophosphates,…) and accidents could be excluded to have been lethal to vultures by autopsy in these cases (Oaks et al. 2004). Further information in Fränzle et al. (2012).

b) Transfer of Chemical Elements

Living beings are exposed to chemicals in the environment throughout. Elements may be resorbed on each dermal, inhalative or oral pathways depending on their physicochemical properties, getting into cells of whatever kind/differentiation, causing, given corresponding properties, an active exposition of the target organ to an element just resorbed.

Limited by their active or passive elimination in different ways (urine, faeces, other body liquids etc.) they are often capable of accumulating in organ systems and tissues, sometimes augmented by a high affinity towards the corresponding target organ or tissue. Taking histological and biochemical effects into consideration, Fraenzle (2007) derived typical accumulation and resorption properties by correlating the electrochemical ligand parameter and the corresponding complex dissociation constants. Like this approach covers ligand properties of biological matter throughout a species (Fraenzle et al. 2004), also transfer/relocation processes within some organism will be understood better when considering rules of coordination chemistry.

Even without discussing this reasoning in much detail, it is feasible to describe the pathway of chemical elements into human milk by a so-called transfer factor (TF). The TF is defined as the ratio of concentration of a certain element in fresh (un-dried) milk to the daily intake by the (single) mother; equilibrium conditions are assumed. It is given by unit [d/kg]. This also gives information on exposition of the breast-fed child. The figure below explains what this transfer factor refers to. Further information in Wünschmann et al. (2008). 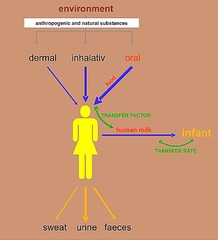 Figure: A simplified sketch of how humans can take up (by dermal, inhalative and oral paths) and excrete (via sweat, urine, faeces and mother´s milk, respectively) anthropogenic or natural substances from the environment. For estimating transfer factors in the food/milk system, analytical data of food samples are related to those of milk from the same mothers. This approach has the drawback of ignoring both other (i.e., dermal or inhalative) pathways of uptake and a possible mobilization from in-body depots (e.g. bones). The diurnal transfer rate of certain elements into the breast-fed child (which means supply but not resorption amounts!) can be calculated using the daily rate of consumption of mother´s milk (Wünschmann et al. 2008). 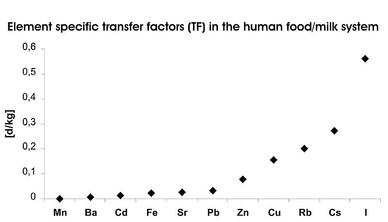 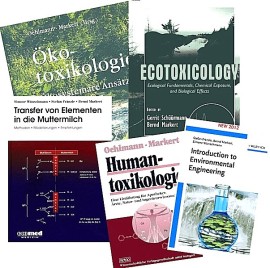 More detailed information to the subject of "Human- and Ecotoxicological Aspects" you can find for example in:

Please also have a look to the Multi-Markered-Bioindication-Concept (MMBC).