Pollution Control by Use of Bioindicators / Biomonitors

A biomonitor, on the other hand, is an organism (or part of an organism or a community of organisms) that contains information on the quantitative aspects of the quality of the environment.

The clear differentiation between bioindication and biomonitoring using the qualitative/quantitative approach makes it comparable to instrumental measuring systems.  Such effects (information bits) of bioindicators (biomonitors) may include changes in their morphological, histological or cellular structure, their metabolic-biochemical processes (including accumulation rates), their behaviour or their population structure. 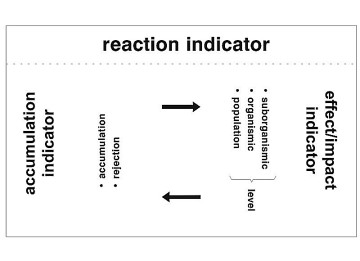 According to the paths by which organisms take up elements or compounds various mechanisms contribute to overall accumulation (bioaccumulation), depending on the species-related interactions between the indicators / monitors and their biotic and abiotic environment.

Biomagnification is the term used for absorption of the substances from nutrients via the epithelia of the intestines. It is therefore limited to heterotrophic organisms and is the most significant contamination pathway for many land animals except in the case of metals that form highly volatile compounds (e.g. Hg, As) and are taken up through the respiratory organs (e.g. trachea, lungs).

Bioconcentration means the direct uptake of the substances concerned from the surrounding media, f.e. the physical environment, through tissues or organs (including the respiratory organs). Besides plants, that can only take up substances in this way (mainly through roots or leaves), bioconcentration plays a major role in aquatic animals. The same may also apply to soil invertebrates with a low degree of solarisation when they come into contact with the water in the soil.

Active bioindication (biomonitoring) is meaned when bioindicators (biomonitors) bred in laboratories are exposed in a standardised form in the field for a defined period of time.  At the end of this exposure time the reactions provoked are recorded or the xenobiotics taken up by the organism are analyzed. In the case of passive bioindication (biomonitoring) organisms already occurring naturally in the ecosystem are examined for their actions. This classification of organisms (or communities of these) in according to their “origin”.

Various newer methods (biomarkers, biosensors, biotests in general) have been introduced  into the application field of bioindication, besides the classical floristic, faunal and biocoenotic investigations that primarily record unspecific reactions to pollutant exposure at higher organismical levels of bioindication.

Biomarkers are measurable biological parameters at the suborganismic (genetic, enzymatic, physiological. morphological) level in which structural or functional changes indicate environmental influences in general and the action of particular in qualitative and sometimes also in quantitative terms. Examples are enzyme or substrate induction of cytochrome P-450 and other Phase I enzymes by various halogenated hydrocarbons; the incidence of forms of industrial melanism as markers for air pollution; tanning of the human skin caused by UV radiation; changes in the morphological, histological or ultrastructure of organisms or monitor organs (e.g. liver, thymus, testicles) following exposure to pollutants.

A biosensor is a measuring device that produces a signal in proportion to the concentration to a defined group of substances through a suitable combination of a selective biological system, e.g. enzyme, antibody, membrane, organelle, cell or tissue, and a physical transmission device (e.g. potentiometric or amperometric electrode, optical or optoelectronic receiver).

Biomarkers and Biosensors can be used as biotest (bioassay) which describes a routine toxicological-pharmacological procedure for testing the effects of agents (environmental chemicals, pharmaceuticals) on organisms, usually in the laboratory but occasionally in the field under standardized conditions (with respect to biotic and abiotic factors). In the broader sense the definition covers cell and tissue cultures when used for testing purposes, enzyme tests or tests using microorganisms, plants and animals in the form of single-species or multi-species procedures in model ecological systems (e.g. microcosms and mesocosms). In the narrower sense, the term only covers single-species and model system tests, while the other procedures may be called suborganismic tests. Bioassays use certain biomarkers or – less often – specific biosensors and can be used in bioindication or biomonitoring.

The term tolerance can be described as desired resistance of an organism or community by unfavourable abiotic (climate, radiation, pollution) or biotic factors (parasites, pathogens), where adaptive physiological changes (e.g. enzyme induction, immune response) can be observed (Oehlmann & Markert 1997). Unlike tolerance, resistance is a genetically derived ability to withstand stress (Oehlmann & Markert 1997). This means that all tolerant organisms are resistant, but not all resistant organisms are tolerant. Sensitivity of an organism or community means its suspectibility to biotic or abiotic changes. Sensitivity is low if the tolerance or resistance to an environmental stressor is high, and sensitivity is high if the tolerance or resistance is low.

Please go ahead with the Examples for Biomonitoring.