Pollution Control by Use of Bioindicators/Biomonitors

With physicochemical parameters such as pH, concentrations of certain (other) compounds, UV luminosity being measured in some environmental compartment, biological and ecotoxicological implications which are and describe drawbacks of chemical changes for living beings or entire ecosystems, can only (at best) be inferred in an indirect way.

This takes an extrapolation from what is known about optimal or marginal (respectively) living and reproduction conditions in terms of chemical effects thereon of certain species to the ecosystems metalevel. Of course, results thus obtained may be more or less clear or ambiguous; cp. the discussion on reasons of forest dieback and possible causal chains involved which wenton for more than twenty years.

The reasoning which prompts and makes one design some biotest is quite different, so to say, turn this approach upside down: some (group of, for statistical reasons) test organism(s) is/are brought to a polluted environmental site or get into contact with some sample taken therefrom (e.g. exposing fishes, snails or zooplankton crustaceans like Daphnia magna to sediment samples) in order to evaluate phasiological changes caused by this exposition, usually done over defined periods of time (say, 48 hours or 30 days).

Among the range of corresponding effects there are

*EROD induction has the peculiar advantage for detection of chemical stress of hardly being suppressed itself by action of xenobiotic compounds (Whyte et al. 2000). Accordingly, EROD test sensitivity surpasses that of most toxicological standard test procedures. 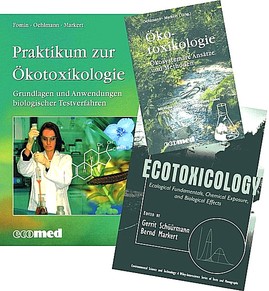 More detailed information on the field of ecotoxicology you can find in: