Bioremediation (i.e., green technologies or phytotechnologies when relied upon plants) mainly deals with biological interventions aimed at environmental contamination assessment and alleviating pollution. Both industrialization and natural resource extraction resulted in the release of large amounts of toxic and waste compounds into the biosphere. These pollutants belong to two main classes: inorganic and organic ones.

According to EEA (European Environment Agency) estimates 1.4 million areas are contaminated (Puschenreiter & Wenzel 2003). In India alone there are about 20,000 abandoned mine sites covering about 60 different kinds of minerals. Biological interventions mediated by some wide array of biological species (none of which will be able to “remove everything”) can be used to remove unwanted compounds from the biosphere, thus contribute significantly to the fate of toxic spills.

Bioremediation is exploitation of biological interventions of biodiversity for purposes of mitigation (and wherever possible complete elimination) of the noxious effects caused by environmental pollutants in a given site (fig. below). If the process occurs in the same place which was afflicted by pollution then it is called in situ bioremediation. In contrast, deliberate relocation of the contaminated material (soil and water) into a different place to intensify biocatalysis, is referred to as ex situ treatment. Biodiversity is the precondition for bioremediation. Quite a variety of plants, natural, transgenic, and/or associated to rhizosphere micro-organisms are extraordinarily active in these biological interventions cleaning up pollutants by removing or immobilizing. Diverse microbes are the most active agents, fungi and their strong oxidative enzymes are key players in recycling recalcitrant polymers and xenobiotic chemicals as well (Loeffler & Edwards 2006; Kawahigashi 2009). 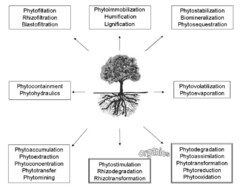 Phytotechnologies deal with the use of plants in pollution control and removal as well as on aspects related to plants from polluted environments as a source of food, fodder, fuel and fertilizer. Plants are able to indicate, exclude, accumulate, hyperaccumulate or metabolise toxic inorganic or organic substances. Thereby they contribute significantly to the fate of chemicals, and they can be used to remove unwanted compounds from the biosphere. On the other hand, chemicals can enter the food chain via plants, which cause unwanted/causing harmful effects (Schroeder P & Schwitzguébel 2004).

As of May 2009, about 10,684 articles have been published on various aspects of bioremediation starting with only 11 in 1989. Thus, there has been a steep rise in scientific investigations and a real knowledge explosion in green technologies. An environmental watchdog survey revealed that Russia, China and India are among the „top ten” most polluted places/countries in the world (Anonymous 2007). In the developed nations as well as developing nations there have been several convincing evidences for applications of green technologies.

Therefore, the field of bioremediation belongs to the realm of environmental biotechnology and is not to be confused with biodegradation, which tackles the biological bases of the (mostly bacterial) metabolism of unusual and/or recalcitrant compounds. Depending on the degree of such intervention, bioremediation is generally considered to include

-   natural attenuation (which entails little or no human action), or

-  bio-stimulation (requiring addition of nutrients, and electron donors / acceptors to promote the growth or metabolism of certain micro-organisms), or

-   bio-augmentation, the deliberate addition of natural or